"The only thing necessary for the persistence of evil is for enough good people to do nothing." Edmund Burke 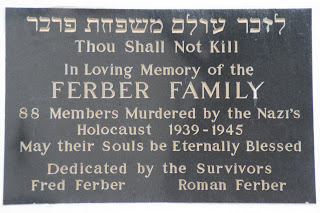 The Remulah temple in Krakow has many similar remembrances and one might be inclined to see that as a sign of remembrance. Then you pay your 5 zlotny to walk through the cemetary and you see the far corner is being demolished to make way for a hotel. Stones broken during the war have to some extent been incorporated into the cemetary walls but this demolition is indiscriminate, with broken stones laying toppled in the cold winter mud. The cemetary fared better during the war, having been buried itelf to keep it's being hidden from the nazis, and now with full knowledge of what is here the bulldozers scrape and dig, toss history aside in little pieces. 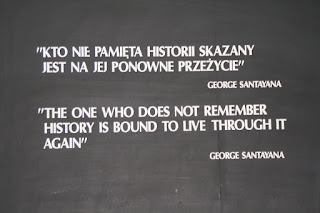 I saw this marker at Auschwitz, located in Oswiecim, Poland. The country fought to change the name from Auschwitz back to Oswiecim in an effort to distance itself from the atrocities of the place. It is illegal to refer to Polish death camps; they are "German-run death camps in Poland." Old Jewish areas of Polish cities are marked on maps should you want to visit, and this week the Warsaw Ghetto boundaries were marked. I saw few practicing Jews in Poland and the temples are as much or more museums than places of worship. It is illegal to deny the Holocaust in Germany but each year there are more neo-Nazis with increased membership.

The oddity of a country feeling it mecessary to criminalize denial of history -- is there anything else like it? 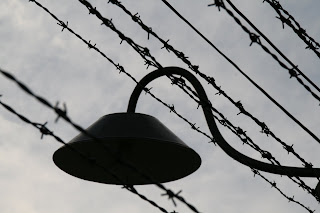 I have since been reminded that the quote is attributed to Edmund Burke -- not that the knowing changes the importance but authorship can be important so mea culpa for my ignorance.